Cultural stereotypes are very important in the world. Sometimes are good but many times are bad and this can imply social problems or provoking unhappy people without any reasons. For instance, many people have the impression that German people are very hard working but people abroad think unreal or not good things from us like these three stereotypes we are going to analyze in the following paragraphs: 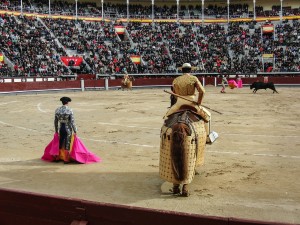 In my view the most relevant stereotype from Spain is that we love bullfighting and this is not true. According to a recent poll from 2015, only 19% of the population likes bullfighting and this percentage descends to 9% if we only consider the youth, people between 16 and 24 years old. So, this image is bad because people from other countries think that we are not sensitive at all with animals in Spain.

Secondly, another important stereotype from Spain is that we can go every day to the beach due to our great weather but this is not true at all. We can assume this is totally true if we live in Canary Islands where the weather is amazing every month of the year but in the rest of Spain we can go only around three months to the beach. Also, we can differentiate between the North and the South. The South (Málaga, Sevilla, Marbella) is much better. And the most important point is we can go only to the beach if we live on the coast. Then, I disagree with this stereotype and it is damaging too for us because they can think we don’t work hard here.

And the last cultural stereotype I chose but not less important is that Spain is a religious country. Maybe we would have to define the meaning of being religious first. Anyway, according to the last polls, in spite of the fact that the 69,3% of the population are Catholics they hardly ever practice it. The 60,8% of the population hardly ever go to the church. Another poll from 2015 reveals that Spain is the fifth country with more atheists in the world.

As we saw, according to some statistics there are many stereotypes that aren´t true. From my point of view, is not correct at all to try to simplify the reality and the customs of one country to some stereotypes because maybe we are saying unreal or bad things. I propose that everyone who is reading these lines can fight this and defend the truth by discussing these stereotypes with statistical information.

This article was written for the English course (C1) at the «Universidad Autónoma de Madrid».