This essay tackles a very important subject: “How can the European Union be more democratic?” Firstly, it is essential to define the word democracy in our context in the European Union. According to the Greeks[1], the term democracy originates from the Greek “democratia”: “demos” means “people” and “kratos” means “power or rule”. Therefore, the word democracy means “rule of the people” where the antonym is “aristokratia” the rule of elite. 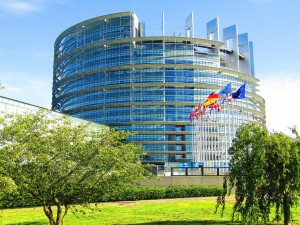 Unfortunately, nowadays there are a large variety of definitions of democracy in the world. According to the Dictionary Collins[2], “Democracy is a government by the people or their elected representatives”. Also, it says that “Democracy is a political or social unit governed ultimately by all its members”.

As we can see in the Treaty of Lisbon[3] (treaty effective since 1st December 2009), the European Union is a democratic equality system where “the European institutions must give equal attention to all citizens”. Also, it is a representative democracy where there is “a greater role for the European Parliament and greater involvement for national parliaments”. And finally, it is a participatory democracy where there are “new forms of interaction between citizens and the European institutions, like the citizens’ initiative”.

In my opinion, it is possible to improve the democracy in the European Union and the modern technology can help us in this process. Firstly, I strongly agree with the people who defend the democratic deficit in the EU.[6] They defend the idea that the governance of the European Union in some way lacks democratic legitimacy. For instance, there is a loss of democracy when the member states transfer legislative powers to Council of ministers of the EU.

If we compare the current democracy in the EU and countries like France or Spain, at first we can see that in these countries the most important institutions are the parliament and the senate (directly elected), but in EU there are at least three important institutions to make decisions (the Council, the Commission and the Parliament) and only one is directly elected by its citizens. Therefore, I think it would be a good idea to increase the power of the decisions of the European Parliament and also create or develop the importance of institutions or bodies directly elected by the population. Because citizens have to feel how democratic is the European Union, at least as their countries are. Another good idea is to lower the number of signatures needed in order to initiative law by citizens. As it is said in the lecture 4-2[7] EU policymaking: the sausage factory, “since 2012, European citizens are also able to ask directly for new draft laws by means of the so-called European Citizen’s Initiative. For that, one million Europeans from at least the, coming from at least seven different member states, will need to sign a petition”. In my opinion, this figure is high and it is an unknown possibility for our citizens. So, it would be a good idea to lower the figure and develop this method among our citizens.

Another good idea to increase the democracy in the EU would be increase the participation of the population. Nowadays, thanks to the advance technology we have today in our hands; we can ask the population of EU about important things frequently. In fact, in some countries like Spain exist referendum but it is very weird its use. As we saw before, this would be the direct democracy where people decide directly about things. My idea is to use our computers in order to communicate our opinion about important topics. In my opinion, it would be a very democratic idea, cheap and the first step about a very real democracy.

One more idea could be create an agency or center of ideas or suggestions where citizens can suggest new ideas or possible improvements in order to ameliorate things in general. For instance, one citizen in the south of Spain can have one idea about ancient castles without any use at the moment and these castles are in danger. These castles can hold hotels or restaurants in order to refurbish them and preserve them. In this case, the EU could promote this and publish it.

Article made it in 2014 obtaining a certificate of the following course: «Understanding Europe: Why It Matters and What It Can Offer you» from HEC Paris from Coursera.org. 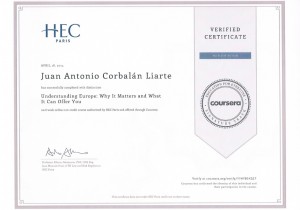